The Father and Son are One

When I think of fatherhood, I think of our ultimate father, our Father in heaven. Years ago, I started retreats and camps named ‘Father Knows Best’. My team wanted to draw the parallels between the relationship of the heavenly Father and the biological father, knowing that a lot of men want to strive to be a good father and a good man. But, we are in need of a positive example and a role model. For those who didn’t have a father, we wanted to let them know that they have a heavenly Father, who is always present and cares for them. And for those who did have a good role model, it was our goal to showcase how they could parent even better with their son or daughter in their own fatherhood.

This relationship between a father and son has really been pressing on my heart and mind. So, I searched for John 5, where Jesus healed the man at the pool and was then criticized as ‘radical’. Jesus said, “I do the work that my Father does”. In John chapter 5, verse 19, he further explains and says, “the Son can do nothing by himself; he can do only what he sees his Father doing, because whatever the Father does the Son also does”. Jesus was in the Father and they were in a perfect, harmonious relationship, where they shared power and authority. But, Jesus was submissive and didn’t seek his own will. Everything he did from healing to raising the dead, he acknowledged his role as the visible image of the invisible God. I always thought this message was so powerful.

My relationship with my own father has helped remind me of the relationship between Jesus and the heavenly Father. My father was the first black coach in Southeastern Conference history. In 1989, he became the head coach of the University of Tennessee. He had had a great coaching career prior; for 13 years he was an assistant coach at the University of Louisville, he went to four Final Fours, and won two national championships as the lead recruiter, so he was a well-respected man. By the time I had to make a decision about where I would play, I wanted to play for my father. There was no other person that I trusted with my life, my career, and my development, more than my father.

I remember as a young boy, my father would always be writing plays, even if we were out to dinner he would find a napkin to write them on. And once I started to play for him in college, running his plays, it came to me that our relationship was an image of the Father-Son relationship in heaven. Why? Because I was able to predict what plays he was going to use because I had seen those plays written by my father before anyone else could see them. Even before the trainers or coaches or my teammates could see them. My job was to take that knowledge, and power that I had, and execute it on the court.

When I think about the relationship between the heavenly Father and Christ, Christ was given full authority and power, the power to save, to redeem, to restore, and to give us an identity. Because Jesus and the Father were one, there was never a doubt in Jesus’ mind what his role was.

The Role of the Father Today

Today, we regularly talk about statistics that plague society in America and around the globe. For example, how the lack of a two-parent home or the lack of a father figure in a young man’s life is so critical. I think one of the first jobs a father should accomplish is to help a young man understand who he is spiritually, who he is in Christ, what his role is, and what his strengths are. It is important to teach how Jesus was completely submissive and obedient, while he walked with integrity. Additionally, a father is responsible to give his son a measure of integrity and a standard for behavior and thought. Ultimately, the goal of these acts is to create an honoring relationship.

Being a father is a passion of mine; I have two sons and five daughters. The biggest legacy we can give our children is to know Jesus. God will take that foundation and shape their lives around it. And as fathers, it is our responsibility to love them unconditionally, be there for them, and not underestimate the power of our presence and words.

Today, I’m encouraged because I really do believe that God is lifting up not only current fathers but also young men who are soon-to-be to be fathers. I feel like this uplifting is necessary because although there is so much division and inflammation, from political and social unrest, every person can agree that it is important for fathers to be present. We can all agree that, together, we need to make fatherhood matter more. I think if we do this, we can really shake up culture and make a difference.

This article accompanies a video interview with Allan Houston on our Promise Keepers Facebook page. Watch the video 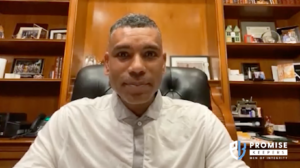 Allan joins other great speakers and pastors like Greg Stier, Pastor Derwin Gray, Choco DeJesus, and more in our digital content delivered through Facebook in the weeks leading up to our first-ever Digital Global Experience. Due to COVID-19, the originally scheduled PK Conference in Arlington, Texas has moved online to a virtual event.
Promise Keepers 2020 Conference is offered via livestream and simulcast to individuals and churches everywhere completely free of charge.
Register for the FREE livestream today! Registration is open.
Churches may register to simulcast the event for free by clicking here.